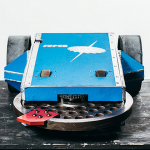 Hey, my name is Sean, been a big fan of robot wars ever since I was young, I didn't see much of the original viewings, but repeats were always there, and now YouTube is too. I don't really edit much here anymore, but I do come here quite often, mainly only to browse what's been going on around this place. We've got a nice community here, so I will always check around here now and again.

In order to replace my old.. List, I decided to put this one. Instead of all of the controversial moments done to death, I decided to make a list that can be added to at any point to give my opinions either on moments people don't tend to bring up, or obscure opinions on generally well known moments. I will probably continue to add more points throughout my time here.

Generally perceived as quite an unfair decision, with even Craig Charles commenting that the Prizephita team most likely felt "cheated", but after watching it again not too long ago, I noticed that it was a lot closer than you'd think. Yeah, everyone tends to remember the bits where Wild Thing were continually flipped, and when they were left spinning around on their side, but what people don't seem to notice was that after Wild Thing got down, the battle turned on it's head. And I don't just mean when Wild Thing pushed Prizephita around a bit. If you look closely, Prizephita's flipper was jammed slightly open towards the end of the battle, and it was moving a lot slower at the end, hence why Wild Thing could shove them around more easily. I mean, they were practically dead within the last ten seconds. That would presumably put the damage category in Wild Thing's favour, as it's weapon still worked, and it was still moving well throughout, and we all know how important damage is...

Could Firestorm have beaten Tornado?Edit

Looking back on the series 6 grand final, I noticed a few things, mostly in this battle. For a start, it was incredibly even. Yes, Tornado seemed to have a faint upper hand, but Firestorm were quick and manoeuvrable and were very well driven. Then, Firestorm managed to flip Tornado over. This gave them a huge advantage, and had they kept Tornado upside down then they most likely would've won, and gone through. But I don't know if Graham Bone was being charitable or something, but they flipped Tornado back over. This ultimately cost them when Tornado got right in underneath and pitted them. This would make them closer than people would suspect in battles, and Graham would probably learn from his mistake if they got the oppurtunity to flip them again. However, I was happy with the outcome of the battle, as it led to an exciting finale, rather than another Firestorm-Razer matchup.

The decline of Hypno DiscEdit

A lot of people think Hypno Disc had a huge drop in quality from series 5 going into series 6, but I don't believe so. I remember one or two people suggesting Hypno Disc upgraded the wrong thing in the disc, but I think the disc worked well in series 6, it just tended to jostle and cause more internal damage than shredding armour like it used to. I mean, I think in their heat they took out every robot in one or two hits, which is still a pretty decent spinner. What it all boils down to was it's semi finals performance, and poor showing in extreme 2. Now, I can't really comment in Extreme 2 because I haven't seen it's battles in a while, but one word describes it's performance in the series 6 semis, and that word is unlucky. In my opinion anyway. I reckon if Tornado had the disc attached, Hypno could've beaten them, but that's another story, Hypno Disc was completely outclassed in it's weakest aspect, it's never been known as a good pusher. All credit to them though, they were very good to survive to the end, especially when they escaped the pit multiple times, very stylish. Then in the loser's Melee, they just sort of bounced of spawn again, into the side wall and conked out. Not particularly exciting, but I think they could've at least put up a decent fight against Bigger Brother, and probably taken out Spawn Again. It was just a shame, really, a bout of unreliability did them in in the end, after surviving well against Tornado. In the end, I think the main reason their series 6 performance was such a disappointment was because their previous three series records were so good, or so much better. Hey, at least they didn't fall out at the heat final, like some legends that series did.

More to come, at some point

Just thought I'd try my hand at a table for four way melees.

SMIDSY vs Hydra vs Wild Thing 2 vs Thermidor 2Edit

Retrieved from "https://robotwars.fandom.com/wiki/User:RelicRaider?oldid=175616"
Community content is available under CC-BY-SA unless otherwise noted.