The Robot Wars logo is a prominent part of the show, featuring in every episode and was used on all merchandise. It has also been incorporated into the various versions of the Robot Wars Arena itself.

When the series was brought back in 2016 a fair number of revisions were made to the logo but the basic design is still largely the same. 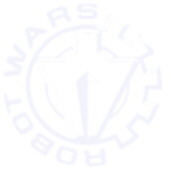 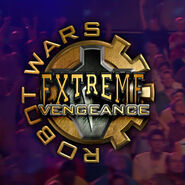 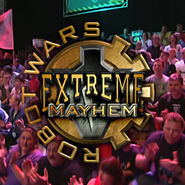 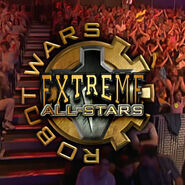 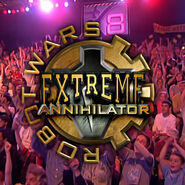 On 3rd February 2016 the BBC unveiled the new logo for the upcoming series. Designed by Jump, it "totally encapsulates everything that is new about the series: updated technology, modernised armour, contemporary design and a seismic updated tonal shift from the original series". [1]

Compared to previous series the cog and text has been rotated 180 degrees, the cog has nine teeth instead of five, there are more technological details on it and looks more worn. The font used in the logo, as with everything else to do with the new series is Pirulen.

Prior to this the BBC had shown various designs through social media. [1]

An earlier version is also known to exist which shows an additional gun and the cog and text reversed, reminiscent of the original series logo.

Early version
Add a photo to this gallery

While the German and Dutch series kept the same logo and on-screen title as the UK series, the American series, however each had added subtitles and incorporated the logos of their respective TV stations into their designs.

Nickelodeon Robot Wars
Add a photo to this gallery

Robot Wars Club
Add a photo to this gallery

Extreme Destruction (GBA)
Add a photo to this gallery

Retrieved from "https://robotwars.fandom.com/wiki/User:StalwartUK/Robot_Wars_Logo?oldid=187961"
Community content is available under CC-BY-SA unless otherwise noted.