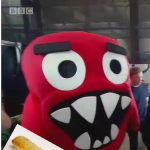 Well hello there, I'm ThatRedOtter, Robot Wars fan and random guy, but who isn't here? Honestly I'm making this up as I go along so if this seems really terrible and... well made up on the spot, that's why. Been a Robot Wars fan since I was about three, since watching it was my family's Sunday tea time show, not that I remember anything, and instead got into it through the minibots that my brother owned, I eventually found Robot Wars in youtube and I was hooked. Since then I've been a massive fan, and have enjoyed almost every aspect of it!

So what have I done for the world of Robot Wars fandom?

Well I have some pedigree happily enough, over on the Robot Wars Out Of The Arena Discord Server, I'm a long-running mod

Like some other users on the wiki I've guest-starred on the Robot Wars History Podcast simply due to being friends with the people who made it, not the best member but I'm well liked enough!

And, most importantly, I've become a somewhat active roboteer myself with my Featherweight, known as Comet.

That's all about me I can think to tell you so far, so good to meet you, and I'm happy to be a part of this community.

Retrieved from "https://robotwars.fandom.com/wiki/User:ThatRedOtter?oldid=300872"
Community content is available under CC-BY-SA unless otherwise noted.