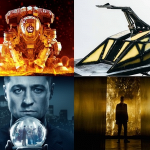 Please look out for images, the image you uploaded was a duplicate. I have already uploaded all the Series 9 images, so be careful. Diotoir the son of nemesis (talk) 17:52, February 27, 2017 (UTC)

I understand you're going to have the job of uploading images, I've got HD image from the BBC website, however it's of a Head-to-Head...That said when you're uploading images you don't mind adding it during the time and or allowing me to upload this one maybe? The question is do you want me to link you the image, after all it came from a BBC preview but does spoil some results for the first round melee.Diotoir the son of nemesis (talk) 19:45, March 9, 2017 (UTC)

I see you wanted to join the Robot Wars Discord. Here's the link - https://discordapp.com/invite/CXx3vDR

Hmm, the middle cut of the team is a bit of an issue, unless the gif simply shows the attack itself, and not the lowering of the pit. I assume the first part with the team will get cut due to what you said about the first second of a selected video being omitted? Thanks for the other gifs all the same though. Sorry about the late reply, I had a shocking night of sleep and have been sleeping all afternoon. Raz3r(talk) 19:19, September 23, 2017 (UTC)

'Robots which debuted in Series 2' Edit

Seeing that you have already worked on implementing some of the other 'Robots which debuted in' categories, would you mind helping me with the renaming process for the 'Robots that debuted in Series 2' category? I have already made a start, but the original category is exceptionally large, and I need someone else to share the work so that we can get the renaming done as quickly as possible.

Thank you very much for your assistance. I probably should've said this earlier, but I am fine with you carrying on from where I left off. Would it also be worth adding more of the side event-only competitors to the new category (e.g. Kick Robut)? VulcansHowl 15:57, September 30, 2017 (UTC)

If we've got machines like Siren and Spartacus (Lightweight) in the category, I don't see why other side-event robots shouldn't be in the category. Raz3r(talk) 15:59, September 30, 2017 (UTC)

Thanks a lot for all the hard, monotonous work that you put yourself through to rename the categories you've fixed thus far. It's certainly deserving of the new badge.

Thank you very much Toast! I know there are still a few 'Robots that...' categories scattered around, and I'll do as much as possible to get them all done, but I doubt I'll have time to be able to do such an intense load again until the Christmas break. Raz3r(talk) 09:03, October 26, 2017 (UTC)

Hi Razer, Crash has already tidied it up, but remember that robots are referred to as singular beings (it, was, etc) as opposed to a collective of the robot, driver and team (they, their, were, etc). Toon Ganondorf (t c) 08:50, November 12, 2017 (UTC)

For your Androne write-up Edit

The televised edit of Androne 4000 vs Tauron doesn't really tell the whole story, so here is a link to the latter two thirds of the fight, which I recorded at filming[1]. Warning: Contains opinions, haha. TOAST 21:34, November 12, 2017 (UTC)

Are you planning on doing any write-ups for Episode 5? We're a man down without Jimlaad this time, so Coyote and Push to Exit are both looking for takers. TOAST 19:10, November 20, 2017 (UTC)

When you do get around to writing Push to Exit, I captured an image of the robot in its Series 10 configuration to use somewhere on the page. TOAST 00:47, November 27, 2017 (UTC)

Hey Raz3r, sorry, totally my bad. I always changed the image names here, this time it slipped my mind. Had just woken up, wasn't thinking. I'll make sure to fix that next time! ToonRaiderStudios (talk)

I've been loving this string of momentum on the featherweight write-ups bud, no doubt there will be your second award waiting after the Extreme 2 write-ups are underway (which partially falls to me as I need to send Nick the audio), so keep it up! While you're at it, I think there is one thing you can touch up - you haven't been including quotes from the pre-final interview, so both fights generally blur together in the write-ups. Adding some quotes from this interview (or the post-match interviews in Round 1) would greatly improve the articles. Keep an ear out for some quotes to put at the top of the page too! TOAST 16:25, November 28, 2018 (UTC)

Thanks Toast. I did look at the pre-final interviews for the teams, but they all seem pretty basic to be honest, not really enough content in them to justify adding a quote in my opinion. I have added a quote from the post battle interview for Rip though, as well as an opening quote of similar lines to the DTK one, thanks for pointing that out. Raz3r(talk) 16:42, November 28, 2018 (UTC)

I can understand the interview quotes being a little basic which seems a fair reason to exclude them, but like I mentioned, let's not understate the secondary ability of dialogue sections, which help to split fights apart quite clearly. I think they're worth having, simply to separate Round 1 and the final from each other. TOAST 16:52, November 28, 2018 (UTC)

Oh, I agree. But it's also because the pre-final interviews sound like introductions to the featherweights for the first time, which would feel a little awkward writing about halfway through a tournament. Raz3r(talk) 16:56, November 28, 2018 (UTC)

With only Bernard left in your Featherweight rewrite crusade (not counting the Series 2 machines), it's finally time to present your award for a job very well done.

On top of this, some of the individual rewrites are expansive enough to earn awards in their own right:

Finally, I'm going to offer a badge for Alpha. Although this rewrite was one of your shortest, it completely changed the tone of the article from a negative depiction of Alpha's "absence", to a fair representation of its efforts. The remaining featherweights are either too insignificant for a badge, or would require an overhaul of the Design section (e.g. Cutlet). Bernard has a total of four fights, so we'll see how expansive that rewrite turns out to be! TOAST 15:44, December 10, 2018 (UTC)

Thanks for the awards and badges Toast, I'll do Bernard tomorrow afternoon after chemistry labs; I don't quite have the time tonight to complete a full write-up, and I'd prefer to do it in one go. I'll try to sort out the other details too as soon as Bernard is complete. Raz3r(talk) 18:09, December 10, 2018 (UTC)

I started the pages about the BBC the company and BBC 2 the channel (for the BBC 2 Ident) which showed Robot Wars. They need more work on them, But I couldn't find the Manual of Style (common name on other wikis) and now found it, as is called the Robot Wars Wiki Style Guide on this wiki Mr Taz (talk) 21:53, January 5, 2019 (UTC)

Hello Mr Taz. As much as I find the articles potentially useful (since, of course, they are connected to Robot Wars), they currently do not meet quality standards since there is little context to them. Why not research a little further and make a basic framework, to build more substantial articles. Thanks. SpaceManiac888 (Talk) 21:57, January 5, 2019 (UTC)

As there is little content to them the Template Stub can be used "This Robot Wars related article is a stub. You can help Robot Wars Wiki by expanding it." so other users can expand them, not just for deletion? Mr Taz (talk) 22:20, January 5, 2019 (UTC)

Having seen similar articles on other wikias, I do now think having the BBC articles could be a good idea. You may want to follow the layout shown on TARDIS Wikia's BBC One page, since I think that's a good example of how to structure an article's paragraphs like BBC Two. Raz3r(talk) 01:38, January 6, 2019 (UTC)

As you've probably seen, I'm doing a major expansion on The Steel Avenger's page. The page should have a picture of its appearance on Storage Hunters. I saw that you uploaded two pictures of Ripper on Storage Hunters. I was wondering if you have a picture of Steel Avenger on the same episode, or if you have a link to the clip so I can take my own screencap. Drop Zone mk2 (talk) 20:18, January 28, 2019 (UTC)

Hi Drop Zone, I'm afraid to say I don't have an image of it, and can't remember exactly which episode it is, but judging by the date of October 2015, it was in either Series 3 or 4 of the UK Storage Hunter series. All of the episodes are free through Jimlaad's blog here, provided you have a UKTV account, which I'm fairly sure is free since I created an account for the Ripper/Beast image. Sorry I can't be any more help. Do bear in mind that a large number of people think Storage Hunters is fake anyway, so I wouldn't sift through like 6 hours of episodes for the sake of one image. Raz3r(talk) 20:42, January 28, 2019 (UTC)

Thanks. Do you remember what the location was for that episode? That is how the episodes are titled on the UKTV site, and that would help me find it easier. I know it was a while ago. Drop Zone mk2 (talk) 22:44, January 28, 2019 (UTC)

Botomatic1000's blog has once again received a spam comment. Please could you or one of the other admins remove the comment as soon as possible. VulcansHowl 21:09, February 5, 2019 (UTC)

I remember the first time I saw robot wars Edit

It was in a robot combat meme compilation when a meme showed me Firestorm and the commenters said “Only Razer beat this last time” then “last time” was shown on a black background and then it showed me Firestorm’s loss to hypnodisc and then a shocked commenter was shown while the Super Mario Bros. game over music played --71.219.77.246 17:56, March 31, 2019 (UTC)

Retrieved from "https://robotwars.fandom.com/wiki/User_talk:O_Raz3r_O?oldid=295334"
Community content is available under CC-BY-SA unless otherwise noted.