Robot Wars Wiki
Register
Don't have an account?
Sign In
Advertisement
in: Articles in need of rewriting, UK Series competitors, Most Original Entry Nominees,
and 16 more

Spinning circular saw/blade, spikes on wheels
Statistics correct as of its most recent appearance on the show, or if not applicable, qualification attempt.

"From an ancient age comes Peter Gibson's magnificent creation. The wheels come from a Victorian pram. The chassis, what little there is, comes from a scaffolding pole, and its gyro stabilising device comes from a helicoptor. It can spin and turn very quickly."
— Jonathan Pearce introduces Wheelosaurus in Series 2

Wheelosaurus was a robot which competed in Series 2 and 4 of Robot Wars. It reached the Heat Arena Semi-Final in its Series 2 appearance, losing to veteran robot Chaos after causing severe damage to Sergeant Bash in its Gauntlet run. In Series 4, Wheelosaurus made it the second round of its Heat, losing to the seeded Suicidal Tendencies after failing to move in the battle. 55-year old Peter Gibson, one of only a few one-person teams to compete in Robot Wars, often affectionately referred to Wheelosaurus by the name Grunge-Bot. Initially, Wheelosaurus was a reserve robot for the Series 2, ranked behind Panda Monium and Griffon, but when Minotaur withdrew from the main competition, it was elevated to Heat B of the main competition.

Wheelosaurus was also in attendence for Series 3, again as a reserve robot, and was visible in the background of some shots during the series, but this time Wheelosaurus was not selected to competed in any side events or battles.

"In designing his robot Wheelosaurus, Peter Gibson wanted to move away from the wedge and box shapes beloved by so many roboteers. Despite their success, he felt that there were far too many of them. Using this strategy he ended up with one of the most original designs seen in the Wars. His primary concern was that his robot wouldn't fall over, which renders the majority of machines utterly helpless. Peter decided to opt for very large wheels, mounted on either side of a basic mild steel pole chassis. This gave the main body of his robot an almost spherical profile, dominated by the two large wheels, which are actually salvaged from an old Victorian pushchair."
— The Robot Wars Technical Manual on Wheelosaurus

Wheelosaurus was an axlebot, the first of its kind to appear on Robot Wars. Unlike future competitors of this design however, Wheelosaurus did not feature a torque reaction style weapon system. The robot was made from almost entirely recycled parts with its chassis being salvaged from a scaffolding pole. Wheelosaurus' most distinguishable feature was its two large wheels, originally used on a Victorian pram. The wheels were covered with two aluminium dustbin lids for protection and were lined with four large spikes on each side. Its main weapon was a long pole with a multitude of static spikes on the end and underneath the pole was a gyro-stabiliser from a helicopter which enabled it to turn quickly and keep it balanced. Wheelosaurus' spike weapon could be used to good effect in conjunction with its drive lifting it off the floor.

"It's wheels, as we were reminded every time we saw it, were off a Victorian pram with dustbin lids to protect it. It's main weapon consisted of spikes on an arm which could be lifted up and down."
— Oliver Steeples on the Series 2 version of Wheelosaurus[1]

For Series 4, Wheelosaurus underwent a few modifications. The spikes on its wheels were longer and hollowed out while the stabiliser it had was moved to the other end of the pole in front of the body and a new one was added in the place of where the original one was, giving Wheelosaurus two stabilisers and enabling it to run inverted easier. The chassis was now fully protected all the way around with extra armour plating underneath and a red flashing light was added on top of it. Wheelosaurus' static spikes were also replaced by a spinning blade powered by a strimmer engine. The blades were interchangeable and included a three-bladed cutter, a circular saw, a four-bladed cutter and a hardened steel saw. However, only the three-bladed cutter was used in its two battles. Two static blades arranged in an upside down V-shape were also featured just behind the blade cutter.

Wheelosaurus proved to be quite durable, despite being immobilised in its Series 2 battle, its chassis and wheels held up against attacks from the House Robots. However, it was slow and its strimmer engine in Series 4 would prove to be flammable if it started leaking, which it did so in its last appearance.

"I first saw Wheelosaurus at the preview where it was working until it went round a corner, at which point it fell over. Originally Wheelosaurus was a 3rd reserve behind me and Panda Monium but Minotaur backed out so Wheelosaurus got it's big chance. Oh, by the way the stability question was fixed by adding a gyro which worked very well."
— Oliver Steeples on Wheelosaurus' audition[2]

Wheelosaurus arrived at the Series 2 auditions unfinished. It performed well to begin with in its obstacle course run until it took a corner too tightly and fell onto its side. As its wheels did not have the spikes or dustbin lids on yet, it became immobilised. On the back of this, Wheelosaurus was selected to be a reserve robot in Series 2, behind Griffon and Panda Monium in priority. Once Minotaur withdrew, Wheelosaurus took its place.

Wheelosaurus was seen in the background of The Third Wars, suggesting it was once again a reserve or in attendance for side events only, but Wheelosaurus ultimately did not compete in any battles or events of Series 3.

Wheelosaurus would then successfully qualify for The Fourth Wars after defeating Max Damage in its qualifier battle.

Wheelosaurus competed in Heat B of The Second Wars, coming in as a reserve entry replacing Minotaur.

In the Gauntlet stage, Wheelosaurus tackled the middle route. It easily pushed through the barrels, but got stuck momentarily. It then backed out to get a running charge and managed squeeze through the fallen barrels and approached the see-saw. Wheelosaurus got over the see-saw, but then got blocked by Sergeant Bash. It reversed and ran towards Sergeant Bash, wheeling and crashing into its side and riding off. It wheelied again and crashed into Dead Metal before falling backwards into Sergeant Bash. The spikes at the front of Wheelosaurus knocked off Sergeant Bash's flamethrower and punctured the gas canister. Dead Metal pinned Wheelosaurus against the side rail as time ran out. The puncturing of the gas canister led to an evacuation of the building.[3]

"Sergeant Bash is in real trouble here, it's been immobilised by Wheelosaurus! Who'd have thought the Victorian pram wheels could disable Sergeant Bash!"
— Jonathan Pearce

Wheelosaurus managed to cover 11.7m, placing it fourth on the leader board and allowing it to advance to the Trial stage. The trial would be Tug of War, where Wheelosaurus was chained up to Dead Metal. Wheelosaurus started with a strong tug, but was not able to pull Dead Metal as it wheels could not gain any traction and were merely just spinning in place. Wheelosaurus tried to tug Dead Metal again but still to no avail. Dead Metal then pulled back and Wheelosaurus limply rolled closer towards the pit before another firm tug from Dead Metal sent Wheelosaurus into the pit.

"I think he {Dead Metal} was toying with Wheelosaurus and Peter Gibson, Dead Metal. One pull, yep, bye-bye!"
— Jonathan Pearce as Wheelosaurus is pulled into the pit

Wheelosaurus lasted 18.11 seconds, just ahead of Tantrum, again finishing fourth and it was able to advance to the Arena stage. There, Wheelosaurus faced the sixth seed Chaos, the successor to Robot The Bruce. Despite being the veteran, George Francis was worried about Wheelosaurus' multitude of spikes all over its body.

At the end of the series, Wheelosaurus was nominated for the 'Most Original Entry' award, but lost out to Milly-Ann Bug.

"This is the machine which took the bash out of the Sergeant in Series 2, puncturing its gas cylinder. The pram wheels are spiked. The main weapon normally used for cutting wood. Wouldn't it be nice for Bash to get revenge?"
— Jonathan Pearce

Wheelosaurus was placed in Heat H of the Fourth Wars, and was drawn up against Prizephita MK2 and the number fifteen seed Wheely Big Cheese in the first round melee.

In the second round, Wheelosaurus were drawn up against the number thirty-two seed Suicidal Tendencies, although before the fight began, Peter Gibson admitted that the robot was in a very bad way and was unlikely to be able to do anything.

"Peter, you are totally to blame for it. Peter, it's your fault. Peter, move the thing."
— Jonathan Pearce at the start of Wheelosaurus' second battle

After activate was called, Wheelosaurus failed to move, and was pushed around the arena by Suicidal Tendencies. Petrol then began to leak from the back of the robot, and as it was pushed onto the flame pit, it fell on its side and the petrol strimmer motor caught fire, and Wheelosaurus was deemed immobilised. Cease was eventually called, eliminating Wheelosaurus from the competition.

NOTE: Wheelosaurus's successful Gauntlet and Trial runs are not included

Wheelosaurus (left) in the pits (Series 3) 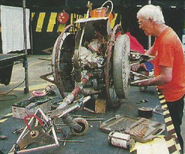 Wheelosaurus in the pits (Series 4)

Wheelosaurus in the arena (Series 4)

Peter Gibson also entered Techno Games, competing in the Internal Combustion Sprint event of 2001 with Sprint Fish, which failed to complete its run after falling over. It was beaten by Miss Struts and Ulysses.[4]