X-Terminator 2 was one of many competitors from the original run of Robot Wars to be made into a pullback toy, following its success in The Fourth Wars. It was sold exclusively as part of The Gauntlet Challenger Box.

The pullback is a faithful replica of the robot's Series 4 incarnation, including its axe weapon, self-righting spikes and interchangeable top-mounted poles and rollbar. The axe on the X-Terminator 2 pullback was activated by pulling the weapon backwards onto a small spring; upon releasing it, the axe would fire forwards, sometimes with enough force to land multiple axe blows. The toy could self-right if it was flipped onto its sides using the side spikes, which the player could pull out individually. However, if the X-Terminator 2 pullback was flipped onto its back, it would not self-right without outside assistance.

Unlike every other pullback toy, the X-Terminator 2 pullback was not sold in its own right. It was only included as part of The Gauntlet Challenger Box, a playset based on The Gauntlet, incorporating various accessories included with other pullbacks, alongside unique accessories creating a hazardous route. This makes X-Terminator 2 the only Robot Wars toy to be only be available within a playset. 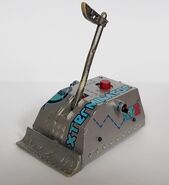 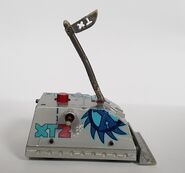 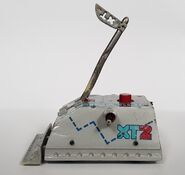 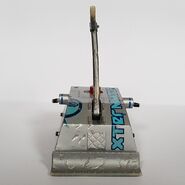 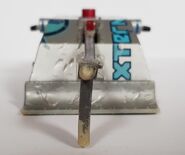 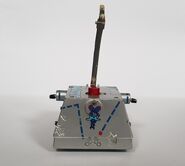 Retrieved from "https://robotwars.fandom.com/wiki/X-Terminator_2/Pullback?oldid=296263"
Community content is available under CC-BY-SA unless otherwise noted.